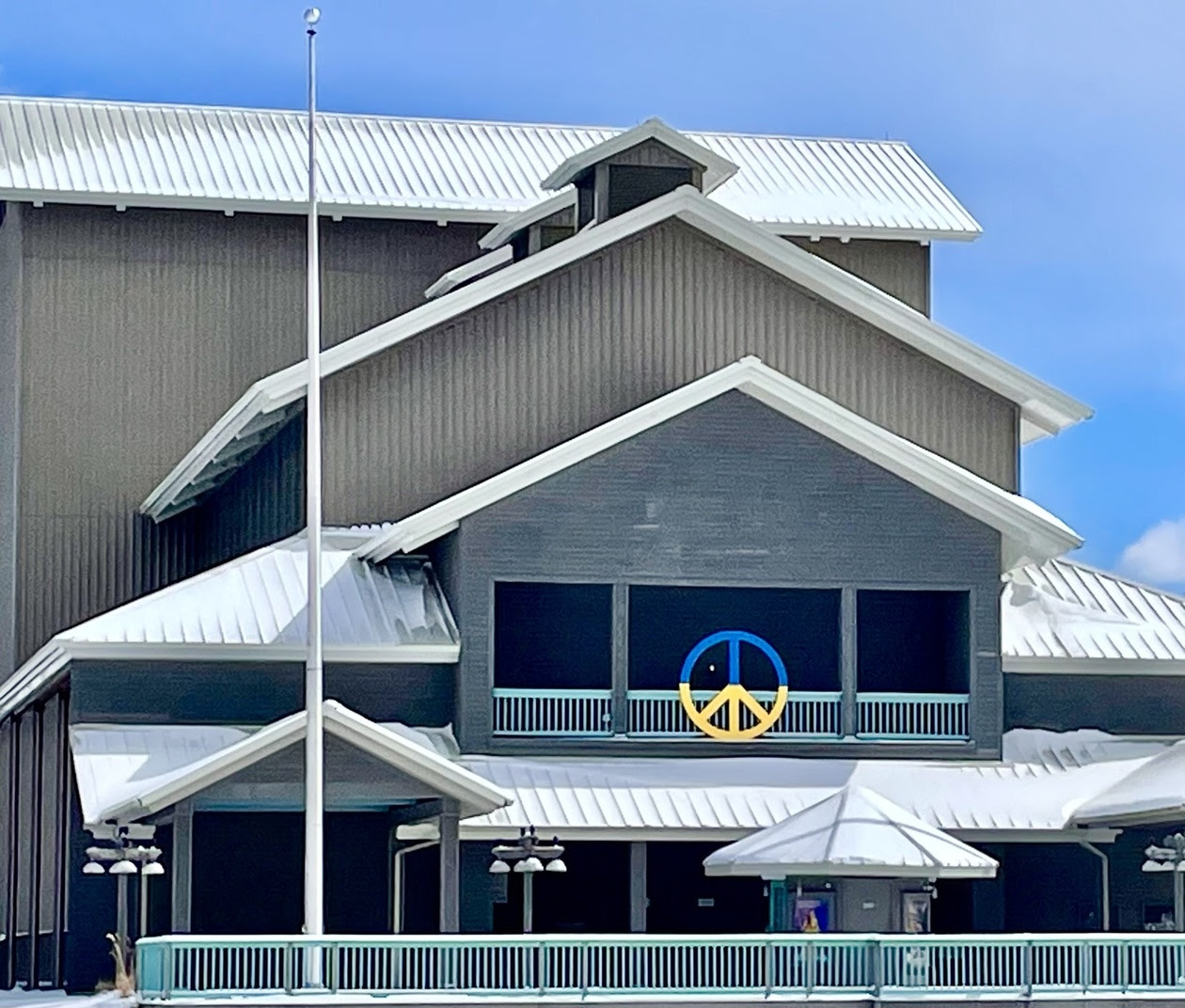 The Glimmerglass Festival stands with our country and our colleagues in support of the millions of people in the Ukraine who, every day, face peril and displacement. The opera and music world has, among our community, many Ukrainian friends and artists, and to them and their families, we send our personal thoughts and prayers. Thank you to our AV Coordinator, Joel Morain, for building this highly-visible and beautiful tribute as a beacon and symbol of our solidarity and hope.

Greetings from the Festival production offices

I’ve often written and raved that one of Glimmerglass’ greatest attributes is that the company owns its own theater and therefore has total access to it. Most companies rent their performance spaces, and during the weeks and months when such companies are not in production, other arts entities — ballet, symphony, theater, etc. — use the space. With our 24/7/365 entree, we are able to prepare and rehearse our shows with exceptional advantages — such as loading scenery from our shop onto the stage in the middle of March to see if all the pieces work as conceptualized, and to give directors the opportunity early in the process to make sure they are able to fully realize their visions. So that’s exactly what we did last Thursday, when Carmen director Denyce Graves, set designer Riccardo Hernández, lighting designer Robert Wierzel and I got together with our Technical Director, Ross Rundell, and Director of Production, Abby Rodd, in Cooperstown to see the set on stage and experiment with the model. You of course know the great Denyce Graves, who will be directing Carmen for us this summer. Although Carmen is arguably Denyce’s most famous signature role as a performer, this production will be her debut as a stage director, and we are honored that she will mark this career milestone with us and bring her extensive knowledge of this opera and experience with the character to our Festival. Although Robert’s name may not be quite as familiar to some of you, this award-winning designer has lit shows for Glimmerglass for more than three decades. We are honored to have Riccardo make his Festival debut. He, too, is one of America’s most distinguished designers, and to learn more about him, I encourage you to visit his website. 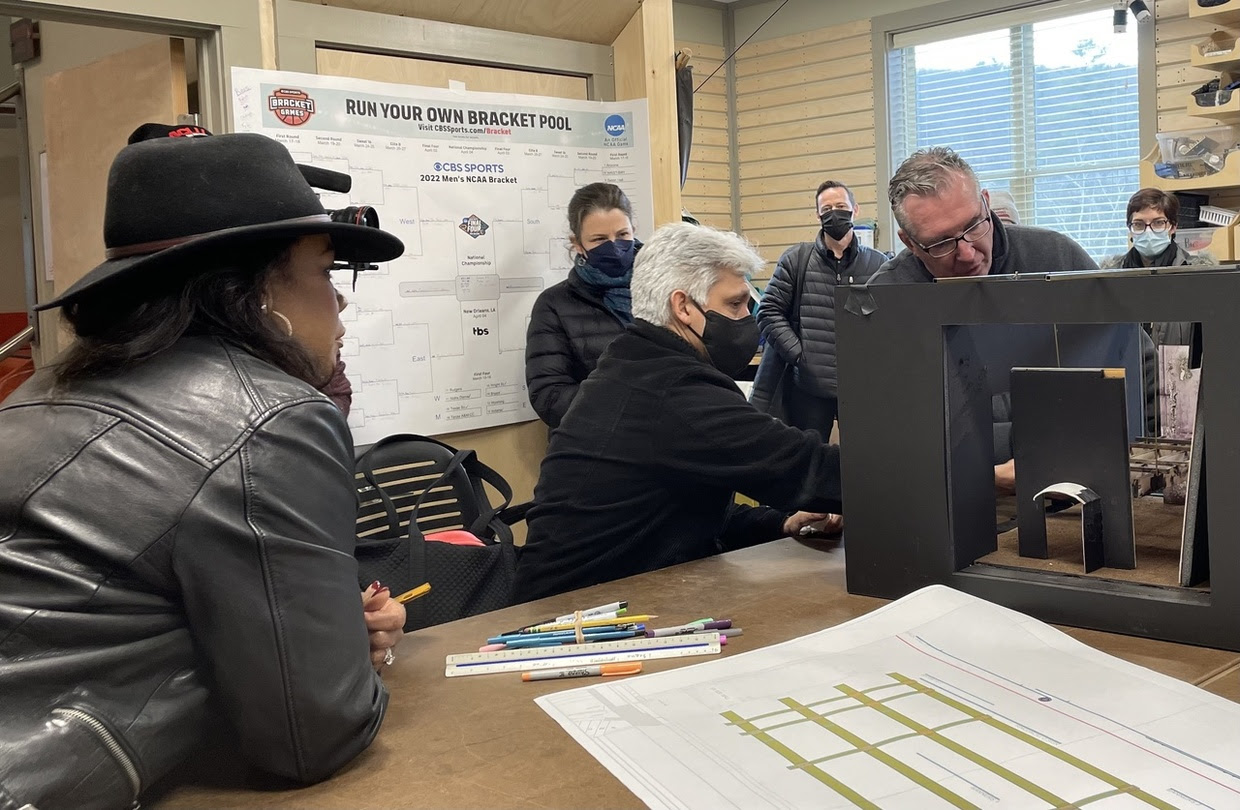 Denyce, Riccardo and Robert in the production office with the Carmen set model.
Photo: Abby Rodd

This creative team and I had the chance to see the entire set on stage and go through every act, looking at how the all the pieces of the set moved and who would be moving them. This was essentially a pre-technical rehearsal. Denyce was able to go on stage and say things like, “Ok, this is where Carmen’s going to be doing the Habanera, so I think we need to move this over a little. And there’s a water spigot, so will the water be on?” Days like these are what makes Glimmerglass so special. Although we do not have huge resources like many other companies, we have an amazing staff who are able to pull things like this together and really give artists the chance to be creative. This set will now be shipped to our co-producers, Minnesota Opera, where it will be on stage in May before returning home for the summer. 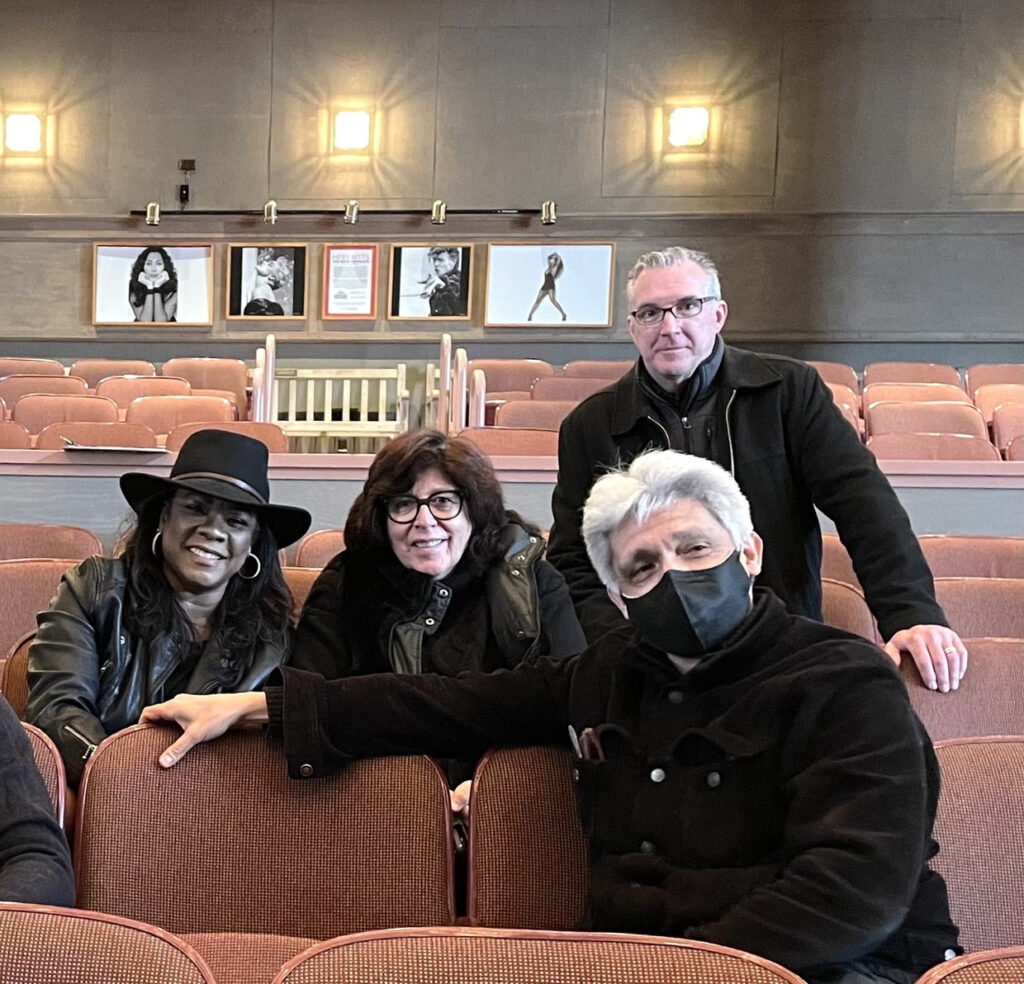 The Carmen team IN the theater! It was thrilling to be back in our jewel box of an opera house working on a production again.

Expanding MCD with Carlos and Denyce. Earlier this month at Washington National Opera, we premiered four new operas as a tetralogy entitled Written in Stone. I am deeply honored that the work has received superb reviews. Each of the operas, presented in a city replete with iconic monuments, explored the meaning of monuments. This was a project I conceived three years ago to celebrate the 50th anniversary of the Kennedy Center, a national monument in its own right. One of the operas, it all falls down, is by Carlos Simon and Marc Bamuthi Joseph; it culminates on the steps of the Supreme Court Building, where a father and son find themselves on opposite sides of a same-sex marriage rally. Carlos, who is also Composer-in-Residence at the Kennedy Center, did the original music for Glimmerglass’ 2021 world premiere, The Passion of Mary Cardwell Dawson, by playwright Sandra Seaton. It was so warmly embraced by audiences at last summer’s outdoor festival, that we are bringing it back this year with Denyce again in the title role, but this time, for two performances in the opera house. As a result, Carlos and Sandra have gone back into it and their revisions include two brand-new songs for Denyce. Carlos took time out from his busy schedule to write these pieces, and I am thrilled after having just listened to them. Nowadays, composers have many tools at their disposal. One is a “MIDI file.” The .MID or .MIDI file extension stands for “Musical Instrument Digital Interface.” I am just learning about this technology, but as I understand it, such a file provides the instructions for how the sound should be produced once it’s attached to a playback device or loaded into a specialized software program. Through this, Carlos was able to give us a sense of the new songs. They are very expressive and will greatly enhance the work. 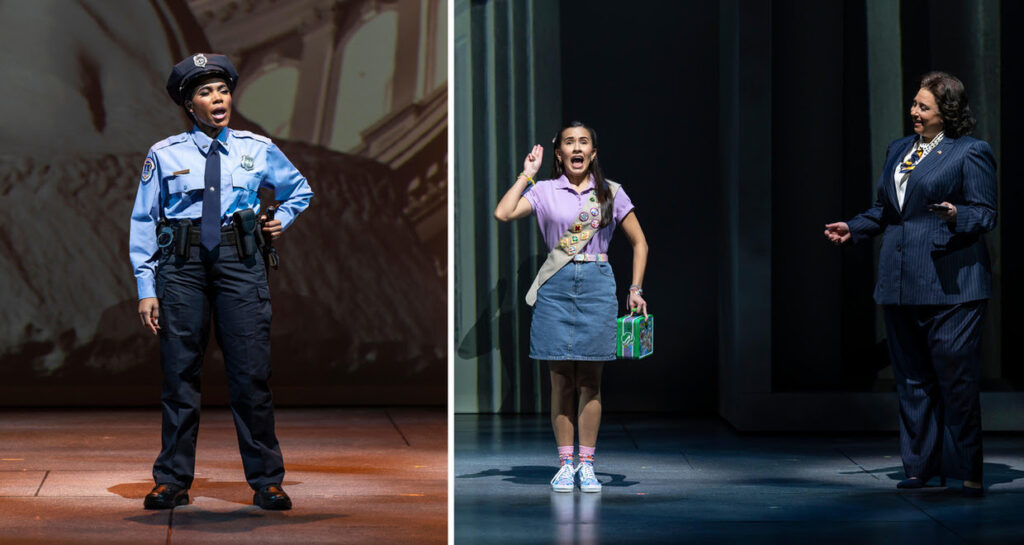 J’Nai Bridges and Vanessa Becerra in scenes from the world premiere of Rise, by Kamala Sankaram and A.M. Holmes, one of four works in Written in Stone. J’Nai and Vanessa are alumni of the Glimmerglass Young Artists Program, and it’s been so rewarding following the trajectory of their careers.
Photos by Scott Suchman, courtesy Washington National Opera.

J’nai, Vanessa and Kamala. Both J’Nai and Vanessa had major roles this month in two of the Written in Stone pieces: in Rise, which pays tribute to the little-known Portrait Monument located in the Capitol rotunda depicting three key players in the women’s suffragist movement — Lucretia Mott, Elizabeth Cady Stanton and Susan B. Anthony — together with a fourth, uncarved face, as a sign that the feminist struggle was far from over; and in it all falls down. J’Nai had the daunting task of switching from singing the role of a Capitol police officer in Rise, to that of the wife and mother striving to reconcile her husband and son in it all falls down. The central character in Rise was performed by Vanessa, who you may remember as our Laurie in Oklahoma!, Musetta in La bohème, and Maria in West Side Story. A special shout-out to Rise composer Kamala Sankaram, who is also the composer of this summer’s productions of Taking Up Serpents and The Jungle Book. Kamala will be one of two Artists in Residence this summer, along with Denyce. 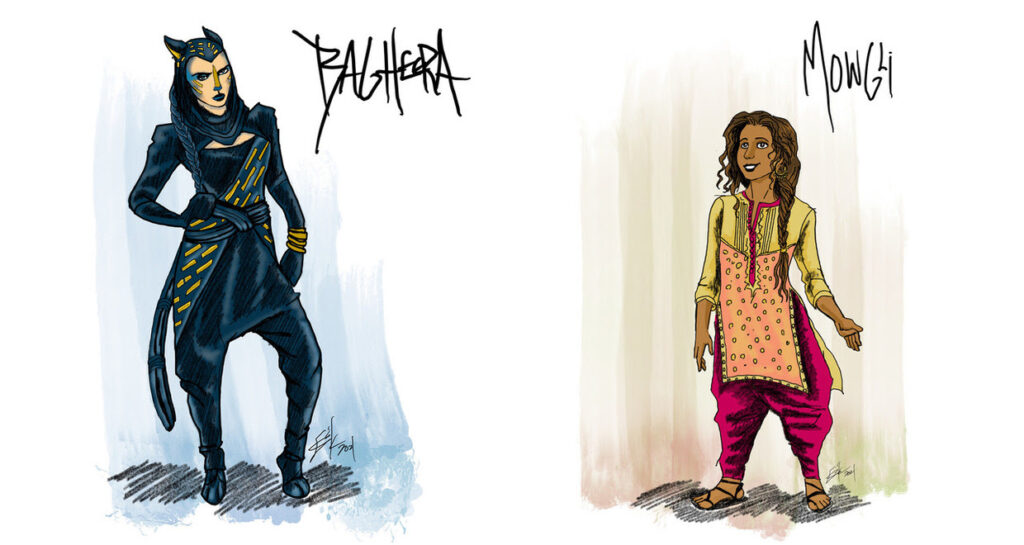 The enchanting costumes for The Jungle Book characters Mowgli and Bagheera by Erik Teague. A shout-out also goes to Kamala’s Jungle Book collaborator, librettist Kelley Rourke, who has had the key role as dramaturg and librettist for all of our youth operas, and to Tharanga Goonetilleke, whose illustrations for our digital preview of The Jungle Book inspired the visuals for this world premiere production. If you are in or near Jersey City, Tharanga’s artwork will also be on display throughout the month of April at the Casa Colombo arts center.

And speaking of The Jungle Book… I am very excited that this year we will, for the first time, be presenting our youth opera on the stage of the Alice Busch Opera Theater. Pre-pandemic, the annual youth operas were shown in other local venues. Having The Jungle Book in our theater will be thrilling for the children in the show and in the audience. Children will be a huge part of the festival this year. In addition to performing many of the roles in this world premiere of The Jungle Book, they will be appearing as Von Trapp children in The Sound of Music, as a cabin boy in Tenor Overboard and as street urchins in Carmen. If you’ve followed my writings for any length of time, you know my feelings about children and the future of opera: When kids see kids on stage, they realize this is something that can be part of their lives. 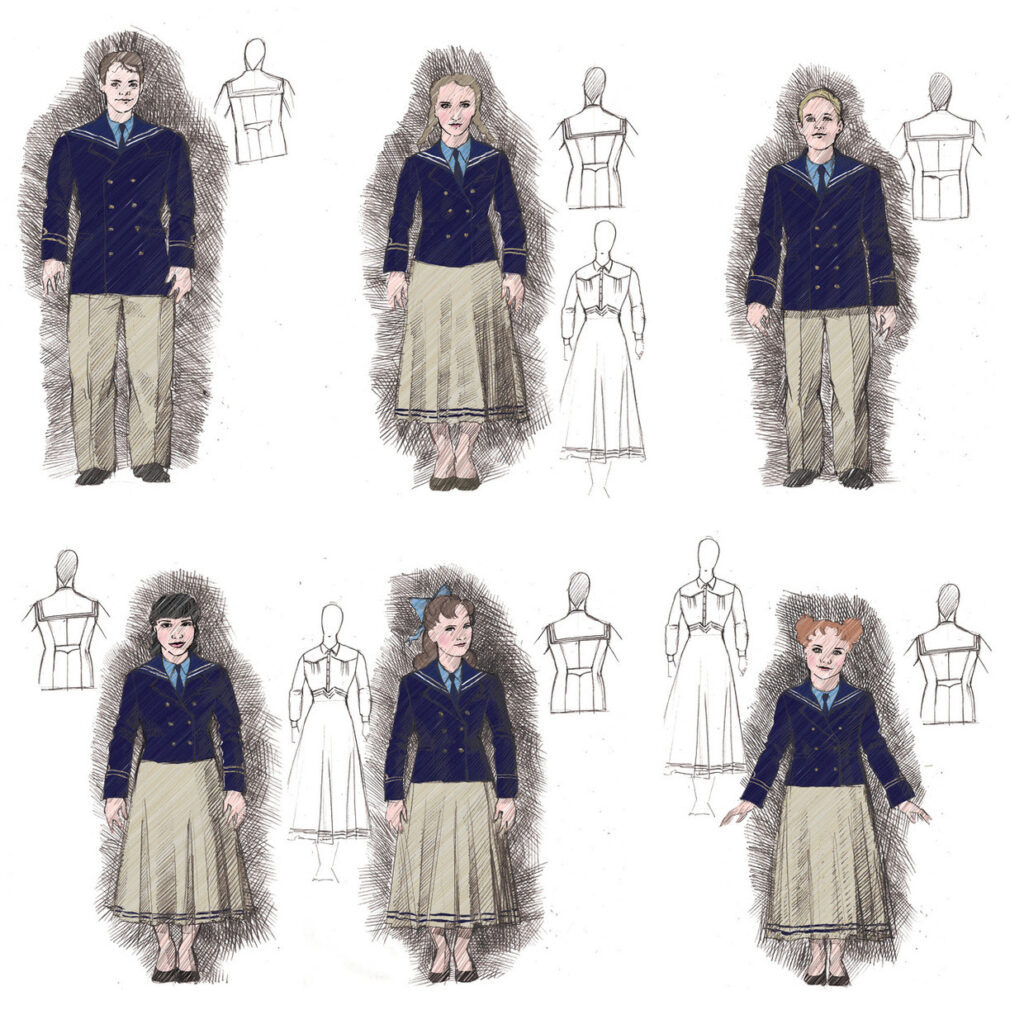 The Sound of Music act 1 costume sketches by Aleš Valášek.

Casting for kids. Mid-March, true-to-form, we had a huge blizzard. It never seems to fail that when we do our youth auditions, this happens, and this round was no exception. Before the pandemic, we would annually get over 100 children to audition — this year it was about 50 who braved the storm. While we had everyone together, we also hustled to take costume measurements so the kids and their parents didn’t have to be out too long as the snow blew and fell quite heavily. (For those of you out of our area, you will be pleased to know that the snow melted quickly in the spring-like temperatures that came on the heels of this storm.) 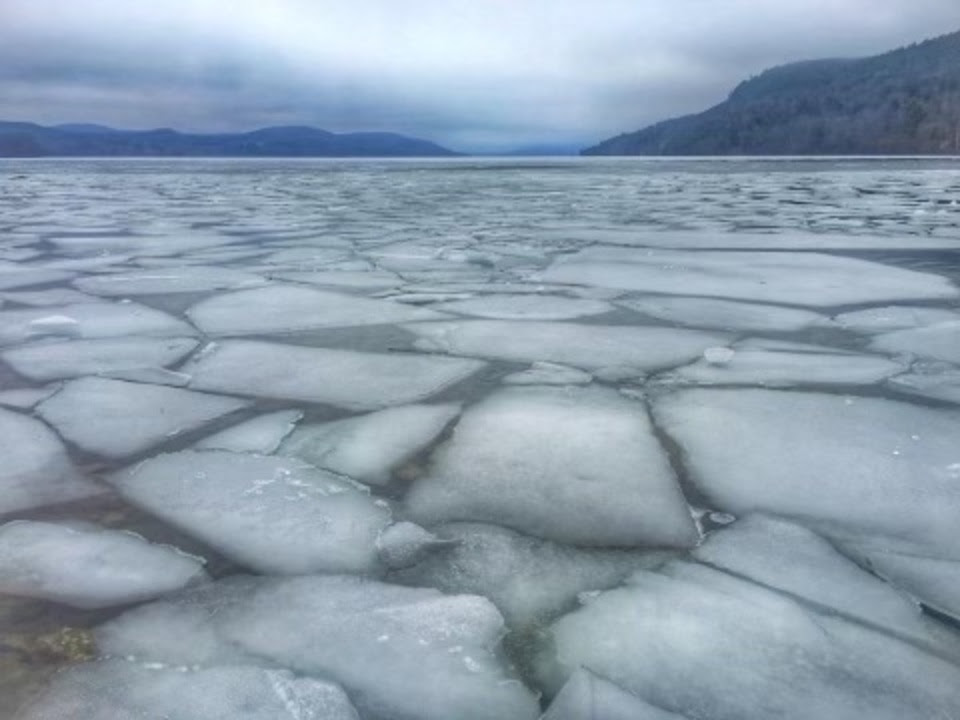 Breaking the ice. Two weeks ago, we “sprung forward” and last weekend we enjoyed the vernal equinox. Despite the warm temperatures that wafted in for a few days, there are still stubborn bits of snow here and there in shady areas. At this time of year, I am always taken by sound of the ice cracking in the lake. It’s truly magical, like distant thunder, and then all of a sudden, as if by divine directive, it’s gone. 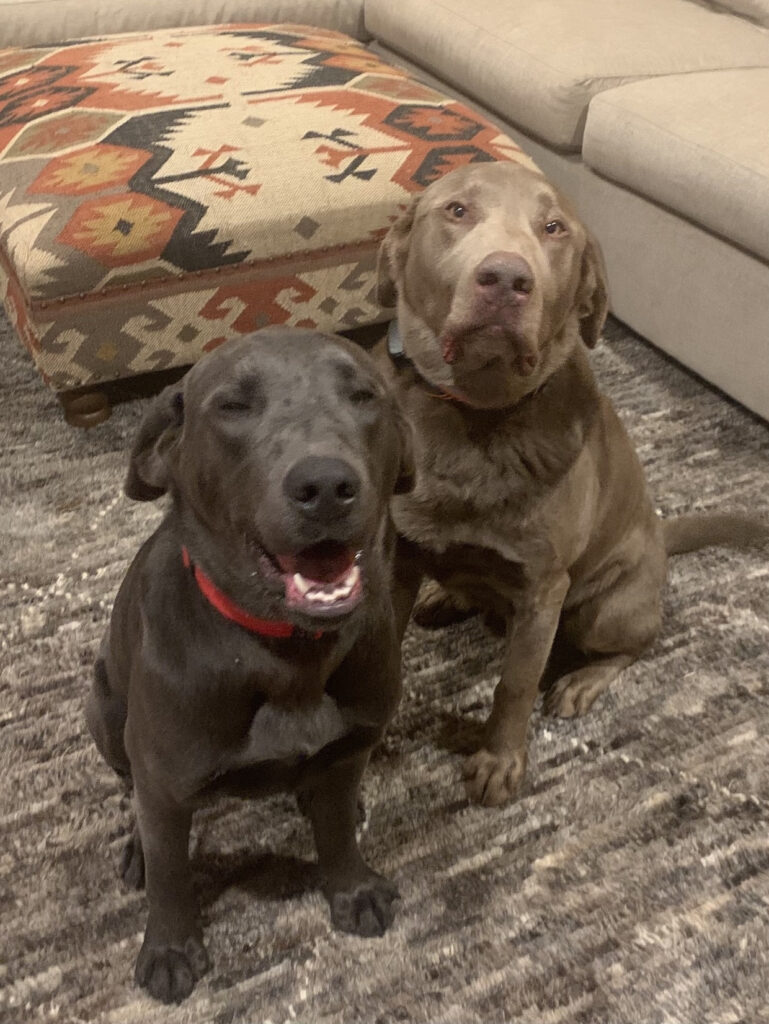 Awakened by the smell of bread baking. Woof!

In honor of the people of the Ukraine, today’s recipe is a delicious pampushka, a Ukrainian garlic bread. (The plural for multiples of these yeast-raised buns, which can also be made in a sweet version, is pampushky.) I converted this recipe from metric, so the amounts may seem weird, but the proportions work. It’s quite easy and very yummy.

First make a yeast starter. Dissolve the yeast and sugar in the warm water. Add half the flour and cover and leave in fridge overnight. The next morning, add the rest of the flour and sea salt to the starter and knead on a well-floured work surface until the dough is smooth and comes away from your hands easily. Divide the dough into 8 pieces and shape into round buns. Put them side by side in an oiled round ovenproof dish or a (9½ inch) round cake tin; cover and let them rise again, this time in a warm place, until doubled in size. They will join together as they rise.

Meanwhile, preheat the oven to 425°F. Make the basting oil, by stirring the crushed garlic into the oil with a small pinch of sea salt and parsley, then let it infuse. When the Pampushky look plump and ready, brush them generously with some beaten egg to glaze and bake for 20–25 minutes or until they form a glistening golden crust. Take them out and baste them with the garlic oil. Serve immediately.

104 days ’til we open! Mid-March marked the second anniversary of going into pandemic mode, and although we had a truly fabulous, creative and fun Glimmerglass on the Grass season in 2021, our return to the opera house is worthy of celebration with a countdown. If you are able and have not done so already, please help us get to the finish line with a contribution to our annual fund. As always…and it always bears repeating…gifts of ALL sizes to Glimmerglass have a real impact, so please help if you can.

With gratitude to everyone for your enthusiasm for this very special Festival,
Francesca Zambello
Artistic & General Director
The Glimmerglass Festival

Vienna, Bratislava, Budapest, and a fond and grateful farewell
September 22, 2022