Our production team recently learned about a need for intubation boxes for healthcare workers during COVID-19. Joel Morain, one of our carpenters and our A/V Coordinator explains what came next:

“There was a company looking for help producing ‘intubation boxes.’ These are aerosol shields that doctors can use when placing a patient onto a ventilator. When inserting a breathing tube, the patients are usually sedated, but can (understandably) involuntarily cough. By providing a clear shield around the patient’s head, it helps contain any contagion within the box and keeps the medical team much safer. The boxes can be disinfected after the procedure and used again on the next patient. I thought this was something I could tackle, so I scrounged for scraps in the prop loft of our scene shop that would be big enough to make parts. I fabricated one prototype and delivered it to Bassett Hospital. They looked it over, liked what they saw, and suggested a few upgrades. With the remaining scrap pieces, I implemented their suggestions, and was able to produce four more for Bassett, our local hospital network. 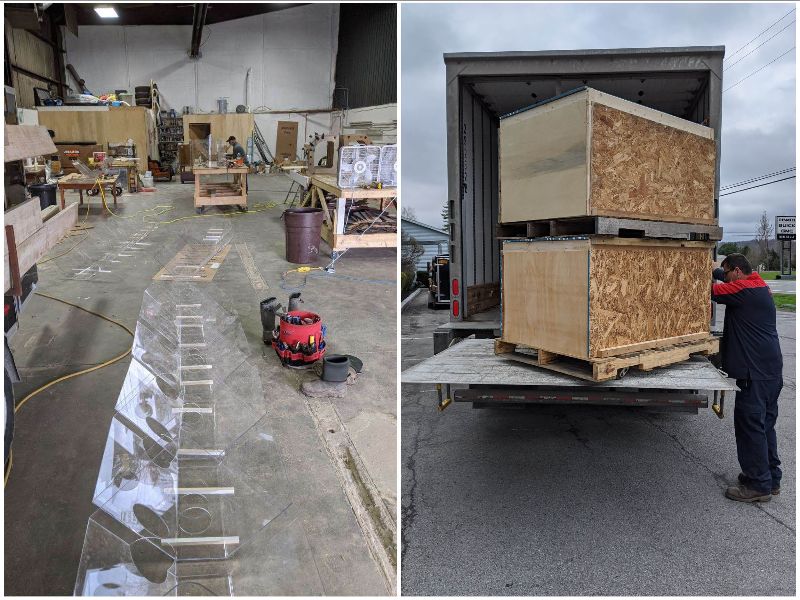 Joel, and his collaborators (Todd Thomsen’s team from Hamilton, NY) have completed more than 100 boxes so far, and there are still more in the works. The plastic parts are cut out on Joel’s CNC (Computer Numeric Control) router.

“About a week later, a friend from Hamilton contacted me. They had heard about my boxes and wanted to hook me up with a local designer/contractor who wanted to start building boxes, too. He had set up a Facebook page to help raise funds for materials and was able to find and order some plastic. (This is getting very hard to do as EVERYBODY is trying to order plastic for shields in grocery stores, gas stations, pick up windows.) I collaborated with this person, and with suggestions from some of his medical contacts, we were able to create an even better version. I’m drawing and cutting all the parts, and I designed and made some jigs for bending and assembly. I am doing this in my Springfield shop [a mile up the road from the scene shop, which is closed as of this writing]. His team is handling the assembly and distribution out of his shop in Hamilton.”

Vienna, Bratislava, Budapest, and a fond and grateful farewell
September 22, 2022