“Director Francesca Zambello has wisely chosen to stage it as a Broadway show, and she has invested the proceedings with all her trademark invention and pacing. Ms. Zambello has an excellent team of Young Artists at her disposal and she shows off the depth of the roster with skill and affection. Francesa filled the stage with enough good ideas for about 10 shows, and all of them were welcome. She set the tone brilliantly during the second half of the overture, with a clown car effect in which a theatrical trunk was placed center stage and performers kept climbing out of it, as dust covers were removed from other set pieces revealing half clad actors who scamper up stairs, and clamber onto ladders to make a final pose at the close of the famous overture. What a witty, Cirque de So Gay start to the night! Thereafter, the director and design team did their damnedest to keep the stage filled with motion, effects, dances, and most of all, a semblance of clarity. All in all, they served this version well…this was likely the best of all possible Candides.”

“Now in its 40th anniversary season, its fifth under the leadership of Francesca Zambello, the Glimmerglass Festival has once again become the kind of company that it was in its heyday in the mid-1990s – a destination that promises opera lovers something new and special with every production. Ms. Zambello has added classic American musicals, presented without amplification and using dancers trained in the style of musical theater, and this year’s staging of Leonard Bernstein’s Candide was the best so far…As directed by Ms. Zambello and conducted by the company’s music director, Joseph Colaneri,this Candide is swiftly paced but darker and more nuanced than usual, with the bite of Voltaire’s satire emerging through the text, the brilliant lyrics, and Bernstein’s sparkling music.”

The best of all possible whirls (David Browning, Taminophile.com)

“As with most Francesca Zambello productions I’ve seen, I can hardly resist singing the praises of the production team before mentioning the stellar cast. Ms. Zambello, as Director, and Conductor Joseph Colaneri, Scenic Designer James Noone, Costume Designer Jennifer Moeller, Hair/Makeup Designer Anne Ford-Coates, Lighting Designer Mark McCullough, and Choreographer Eric Sean Fogel, have created a treasure. From the opening bars of Mr. Colaneri’s energetic reading of the score, I knew this would be a special show, and I was not disappointed. The clever arrival of some of the ensemble members on stage (I won’t spoil it, but you’ll remember it if you get to see it!) and the many other visual delights created by the design team, choreographer, and Ms. Zambello before the first words were sung only added to the excitement…I find that Candide is my favorite Glimmerglass production of the season. This production is full of magic and power and zest, and never disappointed. Go see it if you can get a ticket!”

“It’s easy to believe in magic at Glimmerglass Festival’s production of Candide, directed by Francesca Zambello with Joseph Colaneri conducting. These veteran collaborators stage a new production in which enchantment flows from the first bars of the unmistakably-Bernstein overture to the final ensemble number, “Make Our Garden Grow.”…This production, fashioned by Bernstein’s genius and produced by the talented crew at Glimmerglass, is prime entertainment.”

Francesca Zambello demonstrates how a musical whose story is based entirely on politics and philosophy can ‘glitter and be gay’: “Zambello is to be thanked for not inserting topical political “humor” into the show. There were no Donald Trump jokes and no references to gridlocked Congresses. She played it straight – trusting that the audience would get whatever political message Wheeler, Caird and Voltaire had intended. As a result, she managed to do what Harold Prince (in the 1997 Broadway flop) and Tyrone Guthrie (in the 1956 original flop) could not – that is, make Candide a satisfying afternoon’s entertainment, if not the wicked satire that Hellman and Bernstein intended.”

“With its sprawling nature and unorthodox subject, Bernstein’s Candide has a reputation as a flawed work, but it certainly doesn’t seem so in Francesca Zambello‘s sprightly new production…Zambello strives to give each venue a character of its own. Her outlandish treatment of the El Dorado scene, which seems to draw inspiration both from Las Vegas and from Franco Zeffirelli’s Turandot for the Met, makes that scene stand out and helps give overall shape to Act 2. And she is never at a loss to illustrate humorously the pronouncements of the narrator, which form much of the spoken text…”

“One might say that the vast Homeric epic might too hallowed to be performed at such a small scale. However, many will succumb to the charms of Ben Moore’s disarming score and Kelley Rourke’s prosodic genius…The work progressed from heroic numbers like “Sing to me of Odysseus,” to the blunter plaint, “Face it, he’s never coming home!” Engaging young audiences has become essential for classical music to survive in a world where digital immersion of immediacy of effect raises the aesthetic threshold. “For the arts to flourish and grow and be alive, you must start with children,” says Francesca Zambello, Artistic and General Director for this year’s fortieth anniversary season…Odyssey promises a wealth of innovation: multiple “bards,” a flexi-chorus taking on multiple roles as Odysseus’s crew, Ithacans, and even singing swine (thanks to Chef Circe).”

Francesca Zambello poses here with Anna Catarina Antonacci, star of San Francisco Opera’s production of Marco Tutino’s “La Ciociara” (“Two Women”), based on the novel that inspired the 1960 film with Sophia Loren. “La Ciociara,” a San Francisco Opera commission, will be presented from 13 to 20 June, 2015, as a co-production with Teato Regio di Torino, and will be sung in Italian with English supertitles. More information about the production, including ticket sales, can be found at sfopera.com/Season-Tickets/2014-15-Season/Two-Women.aspx. 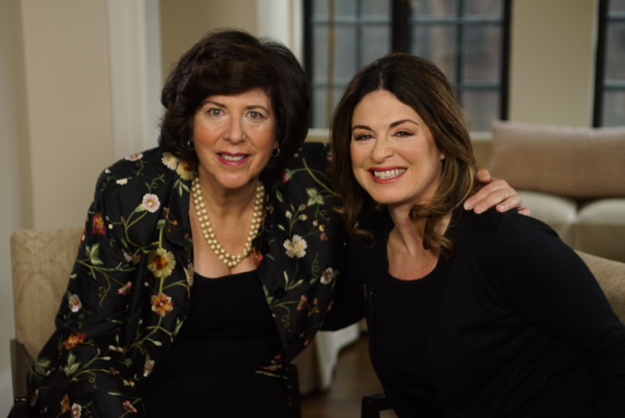 The Ring cycle returns to Washington National Opera in 2016 for three complete performances, with Francesca Zambello directing. Philippe Auguin will conduct, and the cast includes Nina Stemme, Catherine Foster, Alan Held, and Daniel Brenna. The Washington Post called this production “one of the best “Ring” cycles in more than a quarter of a century,” and Zambello “one of the best directors working in opera today.”

More information about the productions, including ticket sales, can be found at web.kennedy-center.org/Marketing/Ring/Landing.