“The Dallas Opera production [of Salome] is a dazzler.”

“Stage director Francesca Zambello manages to punctuate the heaviness of the story with light-hearted moments of humor.”

“The Dallas Opera opened a star-studded production of Salome just in time for Halloween. With a combination of biblical, erotic, scandalous, and murderous themes throughout, it’s almost a crime it’s not being shown on Friday night (10/31) as well…Director Francesca Zambello allows for each of the stars of this work to bring out their own takes on these characters which buck some of the original intentions of Strauss, but in a way that makes you question Strauss rather than the artists…There have been some outstanding productions in Dallas the past few years, Tristan & Isolde, Turandot, The Barber of Seville, but this production of Salome just might be the best…Salome is an absolute, must-see performance.”

Review: The Dallas Opera puts the R in aria with an excellent production of Salome (J. Robin Coffelt, TheaterJones.com)

“…more than 100 years after its 1905 premiere, Salome can still shock. The Dallas Opera’s production not only shocks, though — it also delivers, with some of the best playing from the Dallas Opera orchestra I’ve heard recently, effective acting, and absolutely splendid singing. Oh, yes, and an effectively choreographed Dance of the Seven Veils…This is an outstanding production, and at only 90 minutes long, not the usual opera marathon. Just to hear Voigt and Grimsley sing is well worthwhile. Go. But don’t take the kids.”

“Just when we as a listening public think we’ve got an opera figured out, having seen it staged within certain seemingly fixed boundaries time after time, a production comes along that makes us think again…Visually, this was an impressive affair…Musically, too, this Salome was a great success…A number of the unconventional touches in this production came off quite nicely. The curtain rose before the orchestra had even tuned, giving a sense of being “behind the scenes”. This was a clever device for two reasons: for one, Salome has no overture, so it became a creative way to start things off; and, more meaningfully, this was the first of several allusions to voyeurism, to watching and being watched (as the audience was forced to do, with no music yet to hear). More pervasive and disturbing was the presence of silent onlookers, semi-hidden behind the vinyl curtain. The sight of this second audience hovering throughout the proceedings of nearly the entire opera suggested we consider our own role in watching the opera, and think twice about the moral ground on which we stand when judging the actions of Salome and those around her.”

PBS to show “Porgy & Bess” as part of Fall Lineup

PBS will air THE GERSHWINS’ PORGY AND BESS FROM SAN FRANCISCO OPERA (by George Gershwin, DuBose and Dorothy Heyward, and Ira Gershwin) starring bass-baritone Eric Owens as Porgy and soprano Laquita Mitchell as Bess, and directed by Francesca Zambello, on October 17. Check local listings for time.

The 2014 season at Glimmerglass will bring together four mainstage productions that span 100 years of opera and musical theater, representing the dramatic scope and range of the genre during the modern era. From Puccini’s 1904 favorite, Madame Butterfly, to Tobias Picker’s 2005 contemporary masterpiece, An American Tragedy, these productions juxtapose classic tragedies with comedic themes and grand opera.

More information about the productions, including ticket sales, can be found at glimmerglass.org/festival/2014-productions/. 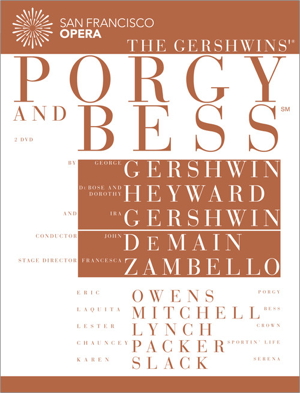 The Gershwins’ Porgy and Bess on DVD and Blu-ray

San Francisco Opera has released their highly-acclaimed 2009 production of Porgy and Bess, directed by Francesca Zambello, on DVD and Blu-ray. The San Jose Mercury News called the production “Dazzling and remarkable!”; the San Francisco Examiner called it “Triumphant!”; and the blog San Francisco Classical Voice (sfcv.org) noted that “Eric Owens and Laquita Mitchell turn in memorable performances in the title roles…and Ian Robertson’s SFO Chorus is at its rafters-shaking best.”

The production marked the first time that an American opera company performed the work, and was based on Gershwin’s original full score, leaving out the cuts and other changes Gershwin made before the New York premiere, the 1942 revival, and the 1959 film.

Click here to purchase the DVD or Blu-ray directly from the San Francisco Opera shop. 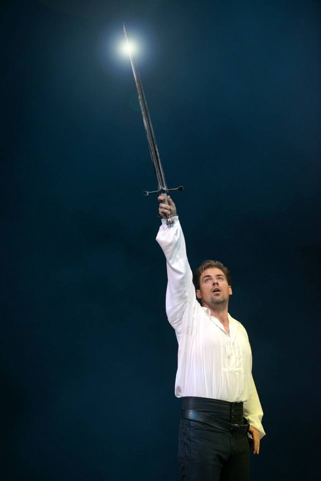 Excalibur opens on 15 March at the Theater St. Gallen

Excalibur, the new musical by Frank Wildhorn, transports the audience into a world of legends, battles, the heartache of love, warriors, and the magic of a mythical time resurrected. A country at war, a people longing for peace, a wizard who ties together the threads of fate, knights who lose their hearts, and worlds from which ordinary people are debarred – this is the setting in which the young King Arthur has to assert himself. With the help of his trusty companions he seeks to realize the utopia of the Knights of the Round Table in the hope of bringing peace to his divided kingdom.

Music is by Frank Wildhorn with lyrics by Robin Lerner and book by Ivan Menchell. The orchestration and arrangements are by Koen Schoots. The German text is by Nina Schneider. The technical team includes Francesca Zambello on stage production, Peter Davison on sets, Mark McCullough on Lighting, Susan Willmington on costume design, and Katy Tucker on projections. The choreography is by Eric Sean Fogel and the fight scenes are by Rick Sordelet.

The Lion, The Unicorn, and Me has fresh energy and charm (Anne Midgette, The Washington Post)

“So a lion, a unicorn and a donkey walk into a bar — along with a singing flamingo, an 11-year-old boy angel and a chorus of exuberant children — and compete for the honor of carrying Mary and Joseph to Bethlehem…the work manages to sustain a lot of fresh energy and charm — from the young cast to Eric Teague’s colorful yet simple costumes — and it left Saturday night’s audience pretty much delighted. There are certainly plenty of extra-musical reasons to want to like this opera. It’s a new American work commissioned by a large opera company. It’s written for children, and it involves plenty of children on stage. It also turns out, soberingly — as Francesca Zambello (who directed it) noted in remarks to the audience before the curtain — to be the first opera by a woman that WNO has ever presented in its 48-year history.”Click here for the entire article. 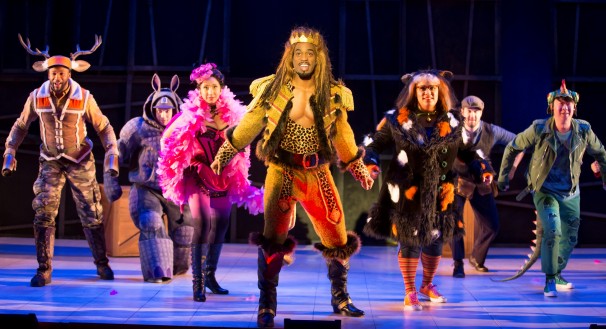 Highly Recommended: The Lion, The Unicorn, and Me (Rebecca Evans, DCTheatreScene.com)

“The Lion, The Unicorn, and Me, a new opera based on Jeanette Winterson’s acclaimed children’s novel, premiered in the Kennedy Center Terrace Theater on Saturday night. Washington National Opera’s Artistic Director Francesca Zambello is interested in music and theatre that speaks to us today, and The Lion, The Unicorn and Me is no exception…Most exceptional about this opera is that it can be interpreted on a number of levels. Those looking for mere entertainment will love the fun costumes and pop-infused tunes, while “deep-thinkers” will delve into ideas like “the smallest creature can make the biggest difference.”…The holidays are about giving and I have a way for you to give back to your children, the arts, and yourself: head over to the Terrace Theater sooner rather than later (The Lion, the Unicorn, and Me is only playing through the 22nd). This is what music, theater, opera, and art need — performances that are brilliant but accessible, smart but unpretentious. This isn’t an opera for children. This is an opera for everyone.”Click here for the entire article. 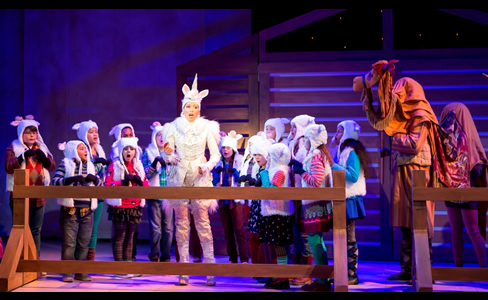 The Lion, The Unicorn, and Me at Washington National Opera (Jessica Vaughan, DCMetroTheaterArts.com)

“Washington National Opera has made a small piece of history with the world premier of The Lion, The Unicorn, and Me, a work commissioned by WNO Artistic Director Francesca Zambello, who also directs. This is their first production ever to feature the work of a female composer, Jeanine Tesori, a multiple Tony Award nominee for her scores for Thoroughly Modern Millie, Caroline, or Change, and Shrek the Musical. She teamed up with librettist J.D. “Sandy” McClatchy, whose day job is a Pulitzer Prize-nominated poet. It’s a sweet story of the donkey in the Nativity Story based on the children’s book by renowned British author Jeanette Winterson, who was in the audience for the premiere…Zambello has a goal to bring new operatic works to Washington, as well as more American works, but her vision goes further than that in her quest to transform the Christmas season for opera. Ballet has its Nutcracker; orchestras have Handel’s Messiah, and now opera has the donkey. This is the perfect medium for very important stories, and this is certainly a very important story, as the cast sings in the triumphant finale, “The smallest creatures can make the biggest difference.” The Lion, The Unicorn, and Me would make for a lovely introduction to opera for kids. The songs are amusing and very relatable and the children outnumber the adults onstage, but has something for adults as well with its intricate score, clever libretto, talented performers, and its message about our universal longing to matter in this world, which is true whatever your age. The Lion, The Unicorn, and Me is an instant holiday classic — moving and sweet with powerhouse talent behind it.”Click here for the entire article. 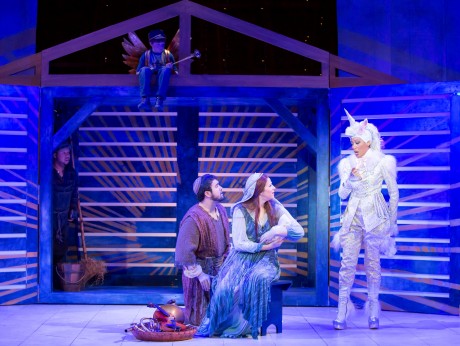