The Royal Opera House has produced a short promotional video for their 2008 production of Don Giovanni, including clips of an interview with Francesca Zambello. Click here, or on the image above, to see the video on the Royal Opera House’s website.

Francesca Zambello featured in video profile on In The Life

In The Life, the nationally broadcast, award-winning public television program that takes an in-depth look at the people, issues, and policies that shape the gay experience, has produced a profile on Francesca Zambello. The program can be seen on public television (check your local listings), and can also be viewed in its entirety on their website: https://www.cinema.ucla.edu/collections/inthelife/episodes/1709.

Andrew Patner welcomed Francesca Zambello on his November 17 show, where they talked about Lyric Opera of Chicago’s first-ever presentations of George Gershwin’s Porgy and Bess. Click here to listen to the interview.

“Those of us who despaired of ever hearing George and Ira Gershwin’s Porgy and Bess at Lyric Opera have been rewarded for our patience as the Lyric presents this enduring slice of American verismo for the first time, in a joyous and compelling production. The company could not have chosen a timelier moment to stage the great American opera whose performance history has been founded on the aspirations of African-Americans. Notice, if you will, how a strong musical performance and Francesca Zambello’s fluid, cinematic direction (Denni Sayers supplies the terrific choreography) serve each other’s best interests…Zambello makes a real community out of Catfish Row, filled with flesh-and-blood individuals living out their ordinary lives within Peter J. Davison’s beautifully ramshackle designs.”

“…the musical will play a five-week engagement at the Paper Mill Playhouse in Millburn, NJ, prior to launching its national tour at the Ordway Theater in St. Paul.

“The St. Paul engagement will begin Oct. 13 and will play the Ordway Theater through Oct. 25. Following St. Paul, Little House will be seen in Nashville, Denver, Omaha, Raleigh, Sacramento and Toronto, among other cities.

“The musical based on the Laura Ingalls Wilder series of classic American books will star Melissa Gilbert — who rose to fame as Laura in the NBC television series “Little House on the Prairie” — as Ma with Steve Blanchard as Pa and Kara Lindsay as Laura.

“Little House, according to press notes, “is the uplifting story of an American family forging a new life amidst the mighty challenges, heartbreaks, joys and triumphs that face them in the newly-settled heartland. It is also the story of young Laura Ingalls, as she begins her life as a young woman, finding purpose, and finding love. Above all, it is the celebration of the pioneering spirit and the core values on which this country was founded — a spirit that still resonates today.”

Little House on a Big Stage: Ma, Pa and Half Pint Now Sing on That Prairie (Patrick Healy, The New York Times)

“Laura, Nellie and Almanzo. Charles and Caroline Ingalls. The wide open land, the unforgiving climate, the death of a baby boy. The characters and stories of “Little House on the Prairie” have delighted readers and television viewers for generations, but now they are being put to a test not unlike a cruel Midwestern winter: Will they thrive in the forbidding world of new American musicals? 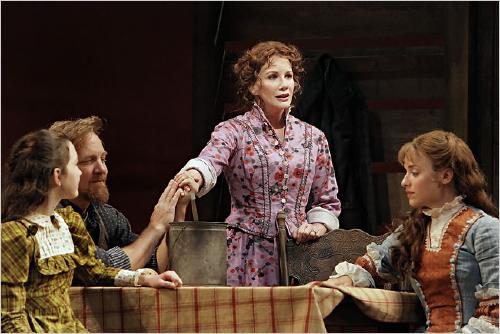 “After four years of fits and starts, previews for the premiere of “Little House on the Prairie,” the musical, began on Saturday at the Guthrie Theater here, in the part of the world that Laura Ingalls Wilder chronicled in her books of the 1930s and ’40s.

“While “Little House” is perhaps best known from the Michael Landon TV series that began more than 30 years ago, and a star of that show is taking part in the new one, the producers have gone back to the books seeking a story of family, journey and rebellion that will, they hope, suit 21st-century audiences.

“”Creating a musical is a challenge, no question, but especially one that so many people will have expectations about because of their love for the books and the TV show,” said Francesca Zambello, who is the director and main creative force of the production. “But we have very high hopes.”

“The project began in 2004 when Ms. Zambello, a well-known opera director who has also staged many musicals, including the current Broadway production of “The Little Mermaid,” decided she wanted to create a family musical. Ms. Zambello said she felt the pioneer adventure and the defiant Laura would prove popular with musical audiences. “The story goes to core American values, the search for the American soul, and I think that will resonate at a time when the religious right and the current administration are still trying to kidnap those values,” said Ms. Zambello, who lives in New York City. “We show the dark side of life too, the foreign Swedes and Norwegians coming into the heartland, which reminds us of the immigration crisis today,” she added. “And the lessons Laura learns: near the end, Ma sings a song called ‘Wild Child,’ telling Laura to embrace that side of herself, that it’s O.K. for a girl to be who you are, be different, be independent while still drawing on her family.”

“As she lined up producers, Ms. Zambello presented her vision for the musical and presented two songs for representatives of the Ingalls Wilder estate. They approved, and workshops of the piece were held in New York. To heighten the project’s commercial appeal, Ms. Zambello reached out to Ms. Gilbert, despite the concern that Ms. Gilbert is not an experienced singer.

“…Laura’s rivalry with Nellie — as girls on the prairie, as love interests for the hunky Almanzo Wilder — also helped address an abiding concern of the director, Ms. Zambello: whether the musical would have enough dramatic tension. While Laura Ingalls can be unruly and has to deal with her sister Mary’s blindness and the harsh Dakota winters, the early drafts of dialogue and scenes had a mildness that might have dulled audiences, the director said.

“The first day of ticket sales for “Little House” was an event at the Guthrie. Long lines formed hours early; many women came with their young daughters; Guthrie staff blogged live about the day on the theater’s Web site, guthrietheater.org, capturing the thrill of girls meeting Ms. Gilbert and Ms. Lindsay. The production will run for 12 weeks, double the length of a normal Guthrie run, a reflection of audience interest thus far.

“Though the show’s producers might be dreaming of an eventual transfer to Broadway, this “Little House” does not feel like a typical New York musical event. The orchestra is dominated by strings and the fiddle. Rachel Portman, who wrote the score, said she sought to evoke a spirit of Americana and homesteading, though she is mainly an opera writer from London who was largely unfamiliar with the books and television series. The lyrics are by Donna di Novelli.”